This enigmatic woman keeps glancing back at the four males at an alarming rate. Her platinum blonde hair glows against the black sky and stands up on end as if electrified. The piercing glare she gives them every time she stops to look back is no less luminescent. The only thing that anchors her ethereal appearance down to reality is her ruddy masculine apparel. Black leather jacket, ripped green pants, ankle-length combat boots. She had introduced herself disinterestedly to them as Ettica in a mildly American-sounding accent, but had volunteered nothing else about herself or anything else then or since.

The boys linger about ten feet behind her, sufficiently unnerved by her earlier show of power. Judging by the frequent peering over her shoulder she does, she doesn’t completely trust them either. What’s more, every time she looks back, she stops as well, causing the other four to halt in place too. Utz sighs and huffs and readjusts the rifle slung over his shoulder frequently while Klaus hugs himself tightly, pale nails digging into pale forearms. Ten minutes have passed since she consented to letting the four follow her to a nearby city or town but the bland concrete little building she rescued them from is still in sight, their progress hindered by her as of yet unexplained paranoia towards them.

The building behind them stands like a white wolf in the equally white sand, contrasted by the pitch black void of the sky. Despite the starless blanket encapsulating them and the surrounding desert, it isn’t dark. A large white moon hovers over them, more massive than any they’d seen, a moon which makes the dust below and around them almost appear to glow. There appear to be other buildings not dissimilar to the one they were freed from smattered throughout the horizon all around, squatting warriors in wait.

After another ten minutes of this, they spot something different in the distance. Ettica looks over her shoulder at them tiredly and points to the object with about as much vigor as a jaded tour guide.

“We’ll make it to there and then stop for the night. Try to keep up, I guess.”

The object in question is white and resembles a saguaro cactus, a long smooth pole with two upward jutting arms. Without waiting for a response, Ettica suddenly sprints toward the thing, drawing an alarmed “W-wait!” From Klaus. The four males run after her, Utz in particular spitting and cursing, but none can quite catch up until she stops under the thing.

They all stop too, but more out of fear than imitation. Pasted onto the smooth cactus is a disk, upon which rests a white face. It’s eyes bore down on the four in an imperceivable expression, hairless brows raised high. Siegfried and Klaus exchange looks of equal parts bewilderment and exhaustion. Ettica on the other hand seems disinterested. She takes off her jacket, revealing a white worn out looking tank top, and throws it and her red boxing gloves down at the base of the thing. After she’s made herself at home, she draws her attention to the four now rather disheveled looking males in front of her.

“Why don’t you guys get some firewood or something?”

Too frazzled to argue, the four scatter and set about gathering some of the driftwood poking out of the white dust. Klaus is certain that the eyes of the face follow him as he moves out. He casts his gaze away as a sudden chill passes through him in spite of the relatively warm temperature. Rolf tags along with him and they stay near one another instinctively as they work. While pulling at a large branch to try and break off a few sticks, Klaus can’t help but notice a building almost identical to the one they were just in about twenty yards away. Klaus and Rolf have travelled a good distance away from the base at which a sizable pile of wood now lies, and the younger boy looks to Klaus and back at the ominous concrete block.

“Do you wanna go inside...?” Rolf asks hesitantly. Klaus returns his stare, mildly debating the boy’s sanity in his head. He can’t deny he’s curious about it, but he’s also immensely exhausted both physically and mentally from all the bizarre situations he’s been finding himself in. Besides, he reasons, this place has proved its unpredictability well enough. Still, as they gather more sticks, the building eats away at his mind until he can’t bear it anymore.

He sighs and considers the short structure once more, brushing a few stray hairs from his face. From here he can only see one side, which reveals nothing but a boarded up window.

“I guess just a peek couldn’t hurt...” he mumbles to Rolf.

The two quietly make their way over to the building. As they approach, they begin to get a glimpse of a little bit of the right side. Klaus notices a doorway, and although he can’t see what’s beyond it from where they are now, he can tell that it’s open. The structure is definitely smaller than the room they were trapped in, probably only about 10 x 10 ft.

They’re nearly at the door now, and Klaus can’t help but hold his breath. He’s the first to get close enough to peek inside, and he does, peeking his head in, his chest tight with anticipation. Inside the doorway, what had been just beyond his vision prior is revealed. 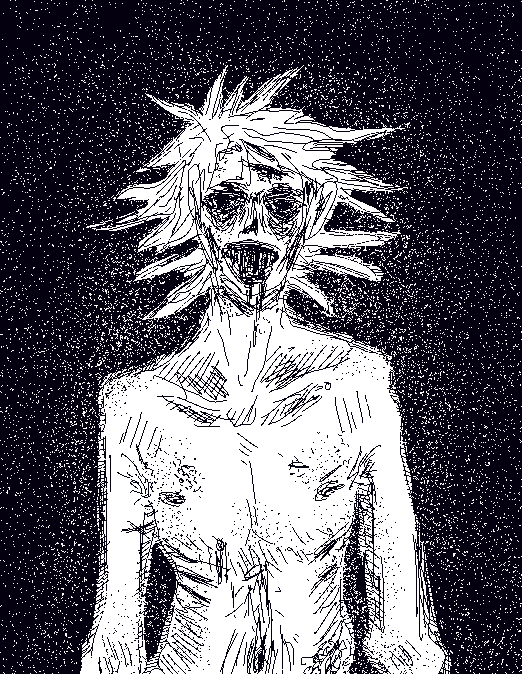 Klaus screams. Tries to scream, rather. Nothing but a shuddering gasp can escape. A corpse-like figure sways slightly at the doorway as inky liquid drips from its mouth. Klaus stands petrified in fear, mouth locked in an agape “o”. Over the sound of his erratic breathing, he can hear sounds from the thing; a discordant moaning and clicking seeps from its maw along with the now chunky looking substances which splatter across its chest and onto the floor. Transfixed, Klaus eyes the throbbing globs on the thing’s breast and unconsciously cocks an ear to listen to what it seems to be wording out from its toothless hole.

After an unknowable amount of time staring face to face with the thing, something grabs him by the arm. Now, Klaus manages to scream. Siegfried pulls him roughly away from the threshold of the building fighting and drags him back to the camp. They’ve gotten a little fire started now, and Siegfried sits the now shaky Klaus down by it, throwing his rather pungent shirt over him. Rolf scoots closer to the seated blond, fiddling with his fingers and looking apologetic.

Klaus barely registers the sound of his voice. He’s looking slightly to the right of the fire, the shirt he was given wrapped around him and almost over his head until the strong scent of body odor hits him like smelling salts and he tosses it away, disgusted. He hadn’t even noticed Rolf running away.

Siegfried stands shirtless over the fire, a cigarette dangling from his lips.

The “in here” uttered by the dark-haired man was unintentional, but the unwavering blackness of the sky combined with the ever present stuffiness lent itself easily to the idea that they were not really outside, but in a large, ancient room.

“It’ll get cold when night approaches. Besides, it keeps the lepers away.” Ettica shouts down from one of the arms of the plastic saguaro she reclines on. The face to her right glares at her, pointy nose wrinkled in disgust, but she isn’t bothered. Siegfried raises his eyebrows.

As they sit by the small fire, Klaus has calmed down somewhat. He rubs his hands together, trying to work up the courage to articulate what’s been on his mind since they left the building they had awoken in. He glances around to study his companions. Rolf is poking at the fire absentmindedly, knees drawn to his chest. Utz sits cross legged, fat hands cupping his wide face and elbows resting on his knees, looking like he could kill someone. I’ll bet he’s done it before, Klaus thinks. The thought does nothing to comfort him. Siegfried is laying on his back, another cigarette in his mouth. He could be stargazing if not for the fact that there are no stars.

Klaus rocks nervously. He doesn’t expect a full answer to his question, but he figures that with a third party present they can possibly discuss the issue with a little less accusation than before. He puts on his best diplomatic voice and scoots nearer to the base of the structure Ettica lays atop, shouting up to her:

His words cut through the silence. Ettica glowers down at him, seemingly not in the mood for conversation, but Klaus continues.

“There was something that we were wondering about, actually! See— back in the uh... Klaus gestures thoughtfully, eyes to the sky, trying to think of the word. “The room we were in... we noticed something a little funny— like the boards... th-they were all boarded up from the inside...? And I was just wondering— well, we were all wondering, I’m sure, do you...?” He trails off expectantly. Utz raises his head from his hands, still looking completely capable of beating a man to death with his bare hands. Rolf draws into himself.

Unbeknownst to Klaus, his chipper alternate personality, often employed in short bursts and in situations in which social oddity comes at great cost, seems to have annoyed Ettica rather than charmed her; she puts a hand to her forehead, eyelids droopy. Sighing, she starts speaking.

“Someone probably locked themselves in there before you guys spawned in. Probably a leper.” Klaus stares at her blankly.

“Leper...? Wait, what?” He asks with a nervous smile. The incident a couple hours prior worms its way back into his mind, but more pressingly, he has no idea what she meant by what she just said. His eyes dart back and forth between his travel mates. Siegfried gives him a bare-shouldered shrug. Ettica exhales once more.

“God, I don’t know how the fuck to explain all this!” She grabs her hair, tussling it up a little, and does her best to elaborate.

“Best anyone here can figure out, we’re in hell. Or some kind of afterlife at least. So... You’re all dead. Game over! And you all ended up, like... reanimating... spawning...” She emphasizes that last word, staring into Klaus’s skeptical eyes and nodding slowly as if speaking to a child, but the blond still looks at her like she’s insane. For all he knows, she very well might be. As soon as she feels she’s made her point, looking to each one of the still confused males eyes, she continues.

“...Spawning into that room. You can spawn almost anywhere here, but you spawned there, and if you ever receive a fatal injury in this place, you’ll spawn somewhere else... here. Like if I were to kill you, for example...” she gestures to her boxing gloves, now tied to a belt loop on her pants. Utz knits his eyebrows together, suddenly pissed off by this woman. “You could respawn over there, for example...” she points to an empty space in the desert. “Or you could respawn halfway across the country. I don’t know. Point is, you’re stuck here, you’re never going back as far as I or anyone else can tell, so you may as well get comfortable.”

She finishes with this, muttering shortly after about going to take a nap. The ensuing silence is thick with the worries, fears, and contemplations of the four, and although they are all weary from the day’s events, rest does not come easily.